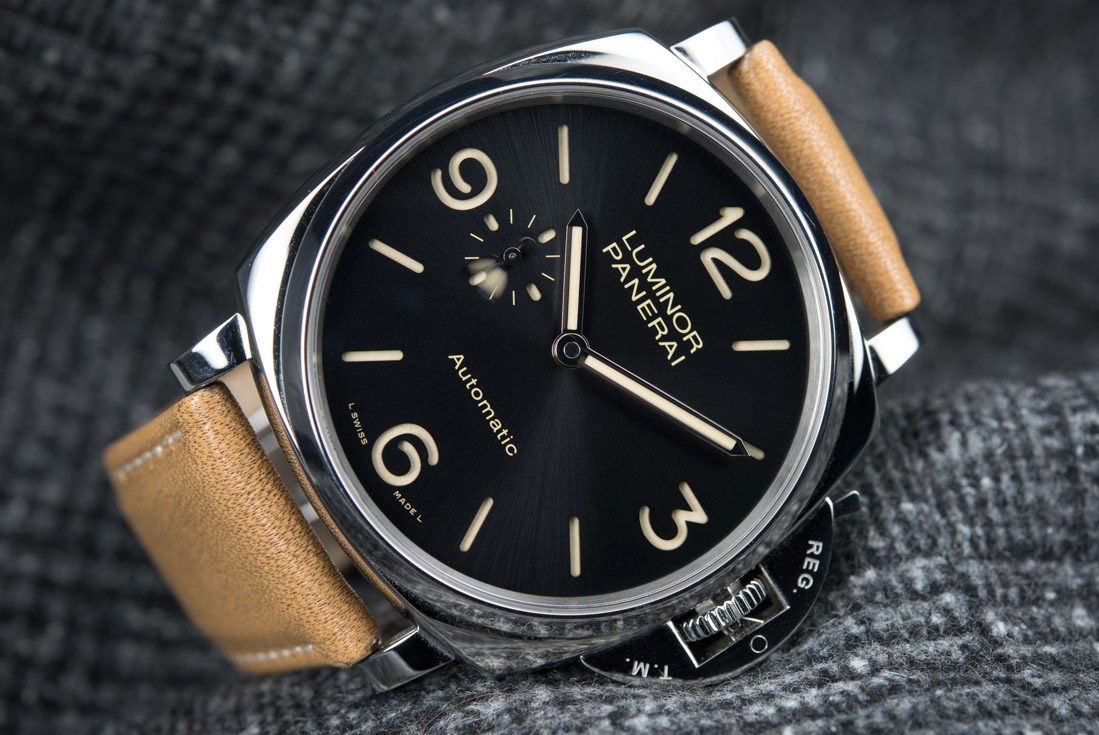 Exactly one year ago, when Panerai launched the Luminor Due, it was well-documented that I wasn’t convinced about this new, second chapter for the much-loved Luminor collection. To come to grips with it and see what it’s like in the metal, I decided to review the Panerai Luminor Due 3 Days Automatic PAM674, which is the stainless steel, 45mm wide version of the four pieces that Panerai debuted the Luminor Due collection with.

The Luminor Due presently comes in either 42mm or 45mm-wide cases in either steel or red gold, with the 42mm versions featuring the P.1000, which is a good-looking, small, hand-wound, “3 Days” caliber. The 45mm variants, like the one we are looking at here, are powered by the still remarkably thin but complicated P.4000 in-house caliber, which also offers 3 days of power reserve but adds micro-rotor-driven automatic winding to the mix and about $2,000 to the price. As such, we are looking at a Luminor that retails for slightly over the $10k mark. All this noted, what I first had issues with were the name and some of the specs of the Luminor Due, so let’s see if these start to make sense in real life before we do our regular review run-down on the PAM674.

Luminor Due As In Luminor Two

Due (pronounced “doo-eh”) means “two” in Italian, so the Luminor Due collection carries the weight of being the second generation or second chapter of the Luminor, one of the most successful and recognizable (see how I avoided saying “iconic”?) watch collections of this century. Also, this is exactly what baffled me when I covered the Luminor Due upon its debut in May 2016.

In my mind, in line with product naming practices across any industry I can think of, when a product name has a sequence number added to it, I am led to believe it is all around as good as, or superior to the one that preceded it. This applies to cars, technology, aviation, household electronics, and pretty much every other industry. So the Luminor Due, one could think, is destined by definition to not only succeed, but also outperform the regular Luminor.

However, the Luminor Due offers a remarkably disappointing 30 meters of water resistance, which is measly for any watch and heresy for one that says Panerai on the dial. The Due doesn’t stop there because, like a true Luminor, it has the bare cheek to boast the “REG. TM.” marked crown protector. So, the question stands…

Can And Should This Be A Luminor?

With this major shortcoming noted, I’ll still say: yes, and here’s why. Panerais and especially Luminors are never really very pretty. Cool, masculine, old-school, dashing, even – all these things, surely, but pretty… nah. A pretty Panerai is a rare breed, even if they do get the proportions right a lot of the time. I would not consider any Panerai pretty, save for the two exceptions that enforce the rule – each a Radiomir 1940 in red gold: the PAM575 and the PAM513. The PAM690 in steel comes close with its terrific blue dial and neat case, but misses out by being 47mm and having a petite sub-seconds.

As you have guessed by now, this is where the Panerai Luminor Due 3 Days Automatic PAM674 comes into the picture. The PAM674 is sold on a black leather strap – the most boring strap in all of strap history and one that does little justice to the watch, though it is, admittedly, a nice back-up if you want to wear it with formal attire. So, after putting it on to ease my conscience, I removed the black strap. Drilled lugs are appreciated and, in this instance, work much better aesthetically than the large, screw-secured pins. The strap I installed is an aged, tan leather strap that truly transformed the looks of the watch.

All this was to describe the uncomplicated process that led to the following awe-inspiring moment. As I went back to the PAM674, now with the tan strap (highlighting the tan numerals and text), laying on its crown protector, I clearly recall thinking to myself, sort of in shock: “My God, that’s a great looking watch.” A challenge to imitate with photography, but a memorable moment that did very much happen.

There is something special that its new-found thinness – a slender 10.70mm for the PAM674 even with the slightly domed crystal and angled lugs – gives to the Luminor 1950 case. It looks effortless, light and, even in this 45mm version, beautifully proportionate. However, I would prefer the PAM676 in 42mm, which would admittedly fit my wrist size better.

I say this pretty much every time when I discuss aesthetics, and it really should go without saying: aesthetics is something for everyone to make up their minds about on their own. But, what can objectively be determined about the Luminor Due is that it is one of the least intrusive, most balanced Panerai designs to date – and this, being a new take from Panerai, is finally something that praises the work of today’s Panerai designers, not those from two generations ago.

The magical combination of a perfectly round bezel and a cushion case needs no introduction to anyone who has ever liked a Panerai design, but the Due does offer a different take on the longstanding recipe. First, the bezel is very thin but, with its steep edge and relatively considerable height, it stands out enough that it doesn’t appear too small or fragile. The cushion case is a take not on the regular Luminor, but rather, the Luminor 1950 with the profile turning upwards and into the upper corners, rather than running into vertical lines. This further enhances that slender, filigree look, while the neatly defined (and equally nice-to-the-touch) edge that runs along the full length of the side adds some visual interest and a nice tactile element.

The short, narrow, curved lugs and the minute space between the strap and the edge of the case all appear thoughtfully designed and, again, the drilled holes serve as a nod towards the Luminor Due’s tool watch ancestors – even if this second chapter very clearly isn’t one.

Something I could not get bored of over the three or so weeks that I had the PAM674 was the slim crown protector bridge – and that, I understand, certainly sounds like a contender for this month’s coveted “Nerdiest Sentence of the Month” award. It completely transforms the look of this ubiquitous component. While the regular crown protectors I found at times were large for the sake of being large or just simply too bulky, every time I saw this one peeking out from under a shirt sleeve, I just had to rotate my wrist and take a better look at it. Maybe that’s just me, but something definitely ticked as this polished bridge sat so neatly nearby the complex corner of the case. If, for whatever reason, you want a similar Panerai without a crown guard, the Radiomir 1940 PAM572 is essentially the same (hands-on here).

Legibility is good, as the reflective outlines of the hands contrast nicely against the satin look of the dial. The dark grey sandwich dial of the Panerai Luminor Due 3 Days Automatic PAM674 actually has a very subtle sunburst finishing to it that is completely unnoticeable under low-light conditions and stands out only when hit by strong light at an angle. It is a nice, quality detail but one that will take the back seat next to other dial elements. Lume is good, though as is normal for non-traditional lume colors like this one in tan, the green glow is not as bright and lasting as it is on regular Panerais.

The crystal, like on most Panerais, is simply way too reflective. I have a theory that says this added reflectivity gives a subconscious, unidentified sense of enhanced “luxury” to those who know absolutely nothing about watches and are just going with the “the shinier the more valuable” approach. Given the wide popularity and market that Panerai is in, I guess this is a tactic that works. This noted, I genuinely cannot think of any other possible explanation – and I know even this one is a bit of a stretch. Still, the reflectivity of the crystal is so “good” that it gives a remarkably sharp image of whatever is behind or over you. You can see your face when you look at it or the back of your phone as you try and take a picture, or the individual leaves on the trees above. Under some lighting conditions, reflectivity is not too bad – it is in outdoor environments where it really becomes too much.

Wearability has been excellent, even if this 45mm version, again, is more ideal for those with 7.5″ or larger wrists. Because it is thin, the PAM674 does not get caught up on sleeves, it just slides under, which makes it that much more comfortable to wear. The 24mm-wide black strap was thin by Panerai standards and, with its tang buckle, easy to put on. The strap I ended up wearing with the PAM674, though, was this tan piece from Junik, which worked so much better with the overall looks. When buying, I would definitely ask the boutique/store to replace the factory black strap to something of this color since, as a daily wearer, this is just a much more vibrant, but no less elegant combination. Furthermore, you can always pick up an aftermarket black strap for twenty bucks or so to wear on more formal occasions.