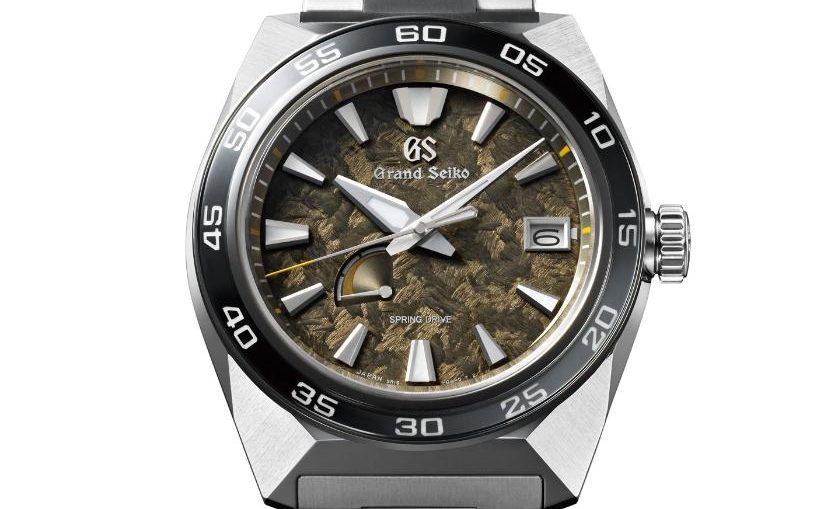 To celebrate the 20th anniversary of its proprietary Spring Drive movement, Grand Seiko has introduced a trio of sports versions — two chronograph GMTs plus a time-only slice — which feature a refreshed case layout for the Grand Seiko brand.
The watch’s design is a nod to the lion emblem of the brand. In addition, all three watches carry the lion emblem in the form of an 18k gold insert in the weight.
Seiko’s proprietary Spring Drive motion celebrates its 20th anniversary this season. Seiko produced the initial prototype of this Spring Drive-powered see in 1982. It was designed by Yoshikazu Akahane, an engineer who wanted to make the ideal view, a timepiece that could indicate three boxes — the accuracy of a quartz movement, the perpetual power source of an automatic caliber and have refined good looks. It took 17 years to create the very first production version in 1999.
The first of those anniversary models is the 18k rose gold Spring Drive Chronograph GMT 9R96 (ref. SBGC230). The 44.5-mm watch uses a distinctive faceted case design (specially finished with the brand’s Zaratsu-style polishing) using two prominent chronograph pushers and a LumiBrite accented black GMT watches bezel. Beneath the dual-curved sapphire glass is a deep red dial to match the crocodile leather procuring it to the wrist.

It uses an outer racing second track common to chronographs, along with large implemented indices, a 3 o’clock date window, power reserve indicator, and three sub-dials for running seconds, chronograph 30-minute countertops, and chronograph hour countertops
Passing over the dial are two adjusted diamond cut hands that have acted as yet another touch of the Grand Seiko watches Sports line, together with a simple pointer for the chronograph seconds. Powering the watch is the automatic Spring Drive 9R96 effective at a 72-hour power reserve, accurate to +/- 0.5 seconds per day, and visible with a golden lion embedded rotor through a sapphire case back. This rose gold version will probably be limited to 100 bits, and will be priced at $42,000.
The following of those models is a ceramic Spring Drive Chronograph GMT 9R96 (ref. SBGC231), limited to 500 versions and priced at $12,900. This model is much the same as the prior improved golden version, but differentiated with its textured brown dial and H-link bracelet over the preceding crocodile leather.

The last of the watches is that the Spring Drive 9R15 (ref. This watch uses the exact same case as the 2 chronograph watches, but is distinguished in its 60-minute outer black bezel as opposed to the 24-hour GMT design. The painted brown dial of this watch is also quite different, with a curved outer minute ring above the split-second chronograph design, as well as just featuring a power reserve indicator and 3 o’clock date window.
The watch is relatively thick at 14.3-mm, as are both of those chronograph models at 16.8-mm, although Grand Seiko has made wearability a priority thanks to the curved shape of lugs, the very low centre of gravity on the wrist, and also the H-shaped connections that offer a more secure fit over conventional metal links.

This is an unforgettable watch that offers elegant fashion